Due to the characteristics of its landscape, the vast plateau of Campo Imperatore is called “Little Tibet” in analogy with the territory of Central Asia that resembles it.

It is one of the largest plateaus in Italy, about 75 square kilometres, located at 1,800 m above sea level in the heart of the Gran Sasso massif, inside the Gran Sasso and Monti della Laga National Park.

It has a very poor vegetation and is characterised by the presence of many small lakes of glacial karst nature. Some of them are perennial, others are formed after the thaw. Among them, Lake Pietranzoni stands out in the centre of the plateau and Lake Racollo, with a splendid view of Corno Grande behind it. Their position and lack of light pollution make them a destination for professional photographers and enthusiasts to immortalise the Milky Way at night.

Spring is the season of nature’s awakening and Campo Imperatore offers its best. The small waterfalls and streams that form during the thaw, the intense green of the grass, the blue of the sky and the small lakes, the sudden blossoming of the crocuses with their purple colour, the flight of migratory birds returning, is surely the most beautiful time to visit the plateau.

At Campo Imperatore there is not only nature, in an isolated and wild environment, but also considerable traces of the history of monasticism and the farming and pastoral tradition.

Campo Imperatore and the Gran Sasso massif are also remembered, however, with episodes of people dying in sudden snowstorms. One of the most remembered episodes in the local memory is the one that occurred in 1919 at Fonte Vetica, when a snowstorm, arriving ahead of winter, caused the death of the shepherd Pupo Nunzio di Roio and his two small children with five thousand sheep from his flock. Today, there is a monument and a memorial plaque commemorating this episode.

On the plateau, we find the so-called “zona dei macelli” (slaughterhouse area), which are permanent refreshment points selling cured meats, sausages, fresh meat and the famous  “arrosticini abruzzesi”. They are the destination of many groups of motorcyclists, cyclists and tourists who, during a trip to the Gran Sasso mountains, stop for refreshment and to enjoy the breathtaking view thanks to the areas equipped with tables, stoves and barbecues.

Access to the plain is guaranteed all year round thanks to the Gran Sasso cable car, a modern cableway system that runs from Fonte Cerreto, within the municipality of L’Aquila and a short distance from the A24 motorway exit at Assergi, to the hotel at Campo Imperatore, the ski resort. During the winter, the car accesses are often closed because of the snow. The spectacle that can be enjoyed from the cableway is unparalleled. 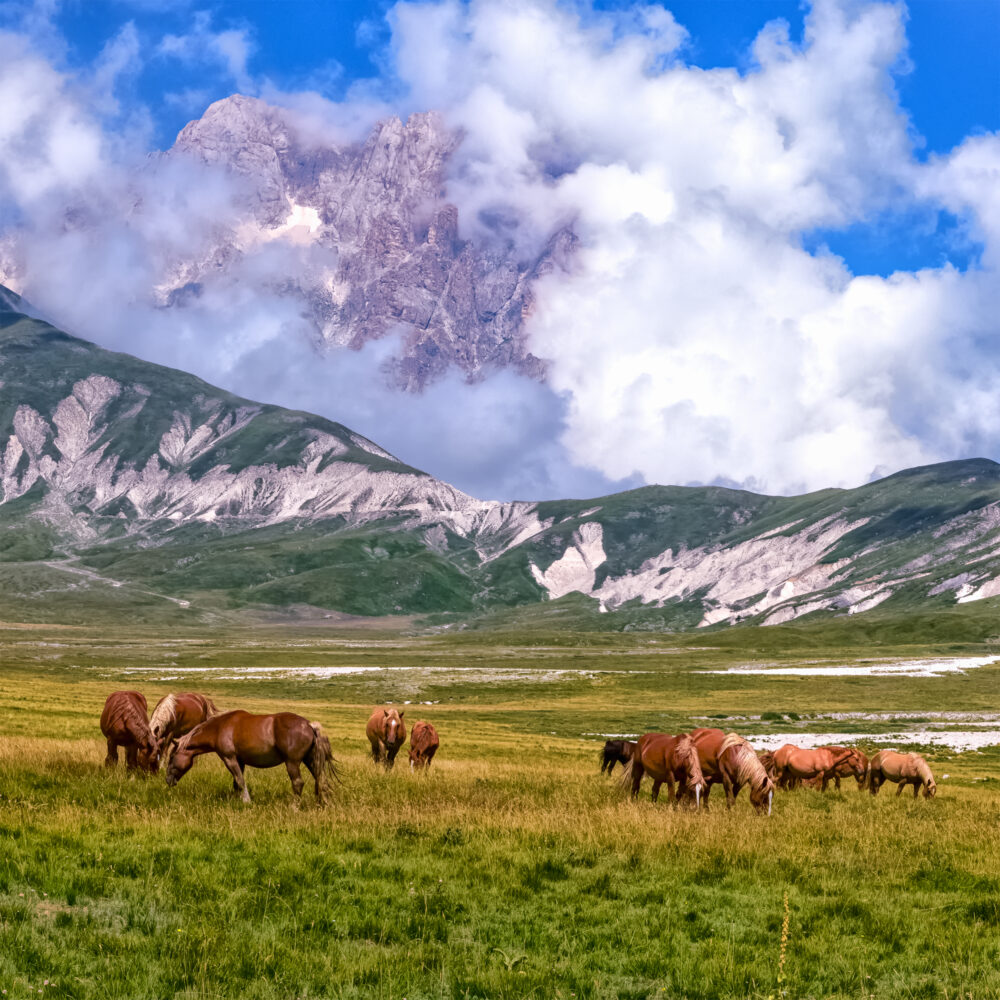 The plateau is also famous for being the last prison of Benito Mussolini who, on the orders of Pietro Badoglio after the armistice of Cassibile, was imprisoned in the hotel for 15 days before being freed by the Germans. Mussolini’s liberation, ‘Operazione Quercia’ (12/09/1943) is remembered as one of the most famous and dangerous aeronautical feats in history. Ten gliders were used, many people were wounded and two Italian soldiers were killed. Its room in the Hotel Campo Imperatore, with its perfectly preserved original furnishings, is now a museum and is visited by the curious and nostalgic. The hotel is now fully functional and the small church of the Madonna della Neve is nearby.

It was also one of Abruzzo’s favourite mountain places for Pope John Paul II who used to frequent the area in summer for long walks in search of solitude and meditation. A peak of the Gran Sasso chain, the John Paul II peak, was dedicated to him and an iron Cross has been placed there.

Close to the observatory is the Vincenzo Rivera alpine botanical garden, created on the initiative of the founder of the same name and former rector of the University of L’Aquila, dedicated to the cultivation and study of high-altitude flora.

The area is very popular with motorcyclists, who often take advantage of the beautiful landscape and roads with little traffic to organise motorbike meetings. Cycle tourism is also widespread and practised. The entire plain, together with the neighbouring areas of Assergi, Calascio, Castel del Monte and Santo Stefano di Sessanio, can also be used for cycling, with countless trekking and mountain bike routes. For horse-riding enthusiasts, there are many trails in the valley, but the most famous is the Gran Sasso Horse Trail. This is a circular route, with equipped rest areas, that goes around the massif, connecting the three sides of the Gran Sasso – L’Aquila, Teramo and Pescara – for a total of about 300 km, making it the longest in Italy.

The plateau is also the starting point for the main excursions on the Gran Sasso and climbs with mountaineering difficulties.

Campo Imperatore is home to a ski resort of the same name, the first in the Apennines, one of the highest in the entire chain and on average one of the snowiest in Italy. The resort is united in the Tre Nevi district with the ski resorts of Campo Felice and Ovindoli.

The entire valley has often been the scene of exceptional filming. About 40 films and commercials have been shot here. Among these are: Serafino (1968) by Pietro Germi with Adriano Celentano; Lo chiamavano trinità e …continuavano a chiamarlo Trinità (1971) by E.B. Clucher with Bud Spencer and Terence Hill, Il deserto dei Tartari (1976) with Vittorio Gassman and Philippe Noiret, Così è la vita with Aldo, Giovanni and Giacomo. In the vicinity, and in particular in Rocca Calascio and Castel del Monte, international films have also been shot, such as Ladyhawke starring Matthew Broderick, Rutger Hauer and Michelle Pfeiffer (1985), Il nome della rosa with Sean Connery (1986) and The American with George Clooney (2010), while the film L’orizzonte degli eventi with Valerio Mastandrea (2005) was shot and set inside the Gran Sasso national laboratories, below the plateau.