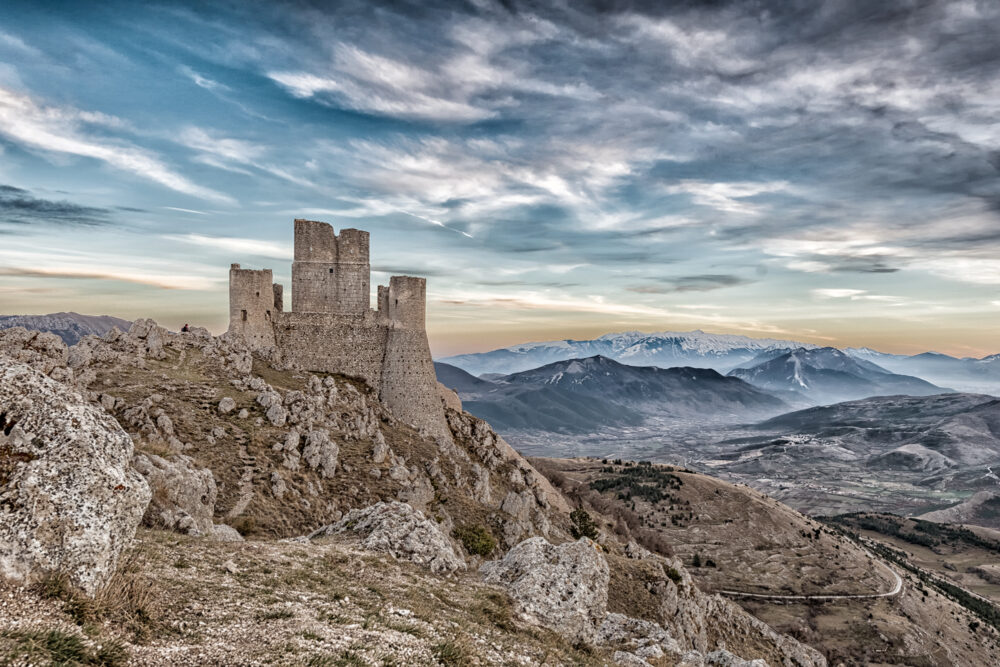 Rocca Calascio is a small village of medieval origin located in the province of L’Aquila, in Abruzzo (Italy), at an altitude of 1,460 meters above sea level.
Its origins date back to around the early 1000’s although some hypotheses suggest that it was built on the remains of a Roman fortification to control the valleys below.
It is famous for the presence of the castle, one of the highest in Italy, which is considered one of the symbols of Abruzzo.

It is set in a spectacular landscape and of great emotion (especially in winter) and for this reason it is one of the main tourist destinations in Abruzzo, a set loved by photographers and for filming.

It was part of a complex system of fortifications for defensive purposes. Its position on the ridge, in fact, in the middle between the Campo Imperatore plateau in the north, the Navelli plateau in the south-west and the Tirino valley in the south-east, made it one of the main fortifications of Abruzzo and allowed the control of the territory both from a defensive point of view and as regards the routes related to transhumance.

In 1703 there was a violent earthquake that damaged the castle and destroyed almost the entire village. The inhabitants moved to the village of Calascio below. With the abandonment and the end of its strategic function the fortress went into decline and almost completely destroyed.

After the success of some photographic settings, at the end of the last century, the castle and some houses of the village were restored and fortified. The houses were then recovered and transformed into accommodation facilities becoming half of many Italian and foreign tourists.

The castle is the most significant monument of the entire fortress. It is situated on the highest point of the ridge, in a dominant position over all the surrounding valleys, and was used as a military observation point for communication with other nearby towers and castles, as far as the Adriatic Sea. The structure, made entirely of local white stone with squared ashlars, consists of a central keep of ancient origin, partially carved, surrounded by a circle of walls and four corner towers with a circular base strongly scarped, built later, from the thirteenth century. The access was through an opening on the eastern side located about five meters from the ground, which was accessed through a wooden ramp, originally retractable, resting on stone shelves. 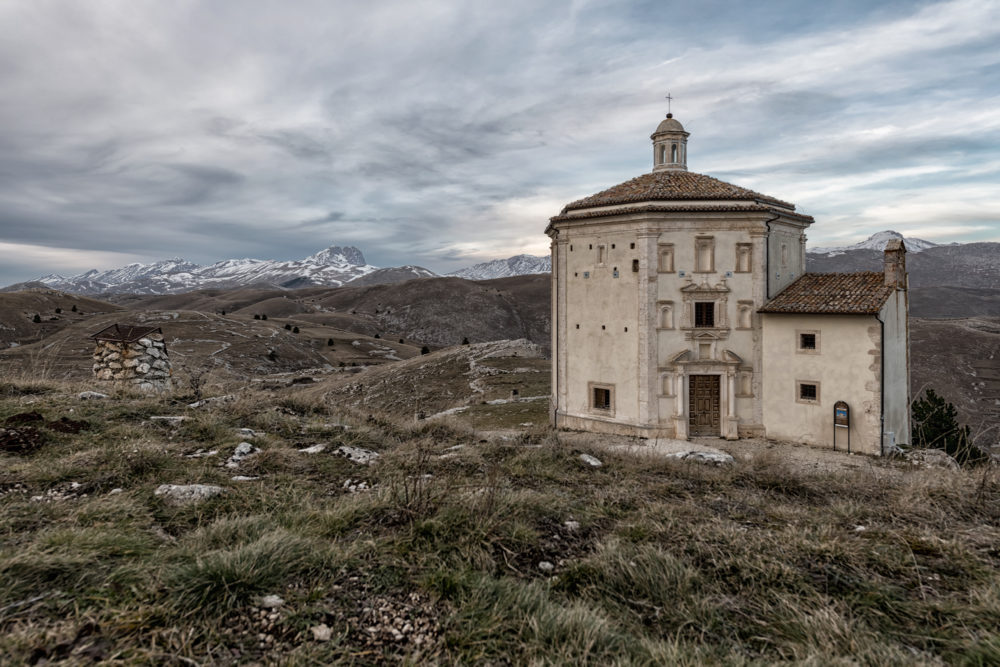 Near the fortress, on the path that leads to Santo Stefano di Sessanio and Campo Imperatore, there is the church of Santa Maria della Pietà, built in 1596 on the place where, according to legend, the local population got the better of a band of brigands.
The church, probably founded on a pre-existing renaissance aedicule, has an octagonal external structure with an environment used as a sacristy resting on one of the facades and a dome with eight segments. The interior, articulated on a system of Tuscan pilasters, has a painting depicting the miraculous Virgin and a sculpture of St. Michael armed. The temple is now used as a simple oratory and is the destination of the faithful and devotees.

Rocca Calascio and its progressive depopulation were the subject, in 1968, of the documentary Nel silenzio dei sassi by Romano Scavolini.

Beginning from the eighties of the XX century, the district of L’Aquila of the Gran Sasso of Italy has been used as setting for numerous cinematographic productions, receiving a discreet tourist and image return. The first feature film set at the Rocca is Amici miei – Atto IIº (Italy, 1982). Later, it was the turn of Ladyhawke (USA, 1985) in which the fortress (then not yet restored) was the refuge of the hermit impersonated by Leo McKern. Then it hosted the set of Il nome della rosa (Italy, 1986), winner of numerous international awards. Later, Il viaggio della sposa (Italy, 1997) and L’orizzonte degli eventi (Italy, 2005) were set here. The fortress is also visible in some scenes of the film The American (USA, 2010) with George Clooney, entirely shot in the province of L’Aquila.