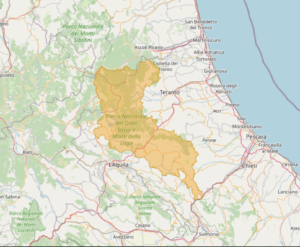 In the heart of the Apennines stretches one of the largest territories of biodiversity that can be admired throughout Europe.

Woods, water springs, waterfalls and medieval villages. An immense variety of flowers and plants, which change to the rhythm of the different seasons, give life to an exciting dance of colors that stands out among huge dolomite boulders and soft, green plateaus. Close encounters with extremely rare animals: the Apennine chamois (1000 specimens and symbol of the Park), the Marsican brown bear (between 30 and 40 specimens), the deer (500 specimens), the wolf (120 specimens and 20 reproductive nuclei) and the roe deer among the large mammals, the golden eagle (11 pairs), the griffon vulture, the owl, the tawny owl and the water pipit among the birds.

The Gran Sasso National Park is certainly one of the best places in Italy for all those who want to live a vacation in the name of nature, sport and art.

Hundreds of marked trails make the happiness of trekking lovers. For those looking for something more challenging, in summer, you can climb up to the Corno Grande, the highest peak of the Apennines, and from here enjoy an unparalleled view, ranging from the Adriatic Sea to the Monte della Laga to those of Majella and most of Central Italy.

With its 320 km of beaten track, it is home to the longest horse trail in Italy. Lovers of horseback riding find their paradise here.

There are a number of marked trails for mountain bike rides.

Birdwatching on the shores of Lake Campotosto.

Food and wine itineraries to discover the ancient flavors of traditional cuisine,

Not to be missed in the vicinity :

Lake Campotosto, located at 1,313 m a.s.l. in the territory of the Municipality of Campotosto (AQ) is an artificial lake, the largest in Abruzzo and the 2nd largest in Europe with an area of 1400 hectares. It was born in 1939 thanks to the construction of three large dams with the aim of using the water for the operation of the hydroelectric power plant of Provvidenza. One of the largest GREEN CENTRALS in Italy with over 530 GWh of average annual production (which corresponds to the average annual consumption of about 200 thousand families and 318 thousand tons of CO2 production avoided by fossil fuels).

The main road of the Park, is one of the most beautiful roads of Central and Southern Italy that connects the province of L’Aquila with that of Teramo crossing the famous Passo delle Capannelle at 1,300 meters above sea level. As you go up the landscape widens with large meadows where herds and flocks graze freely. The name ‘Capannelle’ probably derives from the small buildings of shepherds scattered throughout the territory that was used as high pasture before the transhumance from the mountains of Abruzzo to the Roman and Apulian plains. 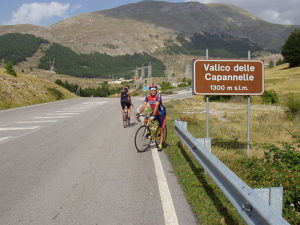 Sanctuary of St. John Paul II (formerly Church of St. Peter alla Jenca) The first European Sanctuary dedicated to Pope John Paul II (2011) has medieval origins and probably, the present Church, was part of a more articulated and fortified monastic settlement. It is a small wall structure with a sail-shaped bell tower where the bell donated in 2008 by the Saint is located. Inside is kept the relic “ex sanguine”.  The Sanctuary is located in the small village of San Pietro della Jenca at about 1100 meters above sea level. The village consists of very few stone houses, once homes of shepherds, which are the crown of the ancient church and the traditional fountain. Here the Pontiff went several times to pray in front of the mountain: it was precisely the love that Pope Wojtyla had for this small village and for these peaks that encouraged its recovery and restoration. The village includes another sacred place: the hermitage of St. Franco from which the water that flows from the fountain of St. Peter’s is born and seems to be able to heal skin diseases. 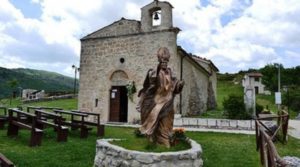 Chapel of the San Vincenzo Institute a small mountain church located on the road that connects the Passo delle Capannelle to Assergi. Religious reference of the shepherds during the high pastures and recently restored. It is very loved by locals and often the destination of events and gatherings. 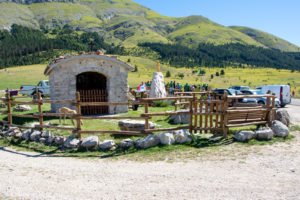 Valley of a hundred waterfalls, the Acero Valley in the Laga mountain range owes its popularity to the incredible abundance of water. Below Mount Gorzano springs gush out countless springs that plunge down into the valley in streams that form hundreds of beautiful waterfalls.  The valley can be reached by a path (about 2 hours) from the town of Cesacastina, a hamlet of Crognaleto (TE). In the valley, a collection structure of ENEL absorbs all the water of the torrent. 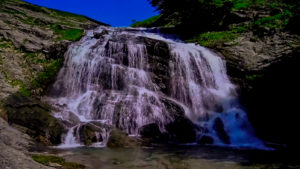 Campo Imperatore, the largest plateau in the park, of breathtaking beauty, more than twenty kilometers long and about seven wide, home to the summer pastures of herds and flocks. From here opens the way to visit the Corno Grande of the Gran Sasso chain.

Rocca Calascio, the famous castle, the highest in the Apennines, which dominates the southern side of the Gran Sasso, and from which, thanks to its strategic position, you can admire the enchanting landscape of the Navelli plain on one side and that of the Campo Imperatore plateau on the other.

National Laboratory of Nuclear Physics of the Gran Sasso (abbreviation LNGS) opened in 1985 is considered the largest and most important underground research center in the world for its 1,400 meters of limestone that separate it from the surface and filter radiation from space. It was conceived in 1979 by the then president of the National Institute of Nuclear Physics, (abbreviation INFN) Professor Antonino Zichichi, benefiting from the excavations already underway for the construction of the freeway tunnel under the Gran Sasso d’Italia massif.

The center collaborates in synergy with other research centers in Italy and worldwide. In its history it has hosted numerous experiments and scholars from all over the world, including the Nobel physics prize winners Barry C. Barish and Carlo Rubbia. Currently there are about 1,100 scholars from 29 different countries.

One of the longest lasting experiments carried out in the laboratories is the Gallex/GNO which, since the 1990s and until 2005, has studied solar neutrinos; its data has confirmed that the flow of solar electronic neutrinos arriving on Earth from the Sun is lower than expected by solar models.

Learn more about the link to the park’s website: