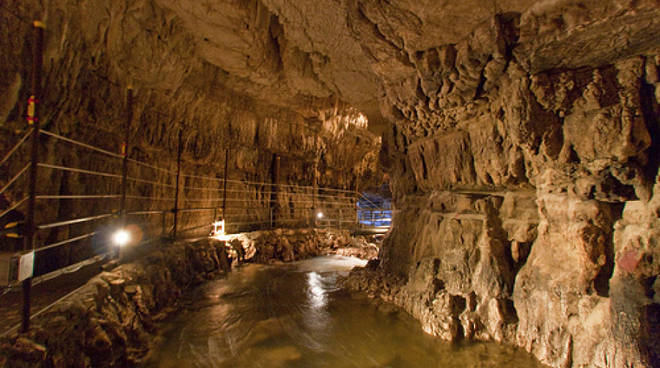 The Stiffe caves are a complex of karst caves located near Stiffe, in the municipality of San Demetrio ne’ Vestini (AQ), in Abruzzo, within the Sirente-Velino regional nature park. Open to the public since 1991, they are now one of the main natural sites in the L’Aquila area, with over 40,000 visitors each year.

The caves are over 1,000 metres long, and have not yet been fully explored and are partially open to the public.

They are an active resurgence; have been produced by the presence of an underground river flowing to the surface, which is almost unique in Italy. The cavities were modelled in geological times by the infiltration, erosion and corrosion of water from the upper part of the mountains above located on the plateau of the Rocche.  In the plateau there are sinkholes and dolines that could flow into the same underground course.

Initially, the watercourse was used to build a hydroelectric power station, the remains of which are still visible today near the entrance to the caves.

The environment maintains a temperature of just 10 °C, which is constant throughout the year.

The tourist route through the caves lasts about one hour and covers most of the explored caves, up to the second waterfall. The ticket office and visitor centre are located at the entrance to the village of Stiffe.

The 2009 earthquake led to a temporary closure of the caves. The complex was safely reopened to the public in 2011. 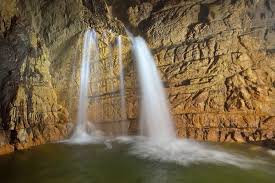 Link to the caves’ website to find out more:

Link to the website of the municipality of San Demetrio to learn more about access to the caves: